Since 2008, a project by The Hemel Hempstead School in association with

FREE DOWNLOAD: An updated (July 2019) guide on 'Your Community at War' covering how you can adapt our project to your local area is available here.  A simple 'Five Steps' guide for how schools can research World War One is available here.

Britain at War with Germany… France Falls in Blaze of Blitzkrieg… Hitler’s Bombs Blitz London… Sad Partings as Children Sent to Safety… Allies Land at Normandy…  The headlines give us the story. We at The Hemel Hempstead School have been seeking since 2008 to find the stories behind the headlines.

There is a wealth of first-hand experiences of World War Two living within our reach, and there is much that we can learn about World War One from the amazing range of sources now available.  We have also begun to explore stories from other wars as well, from the Boer War to Afghanistan.

We are keen to interview people from in and around Hemel Hempstead who have stories to tell.  We are also gathering material from people who have carried out their own family history research.  Join us as we seek to bring local history to life, for the benefit of not just our students but for the community beyond.

Teaching History (December 2011) which is the UK's leading professional journal for secondary history teachers.  Click here to link to the issue containing the article, written

by Lynda Abbott and Richard Grayson.  It describes how the methods used for the

'Hemel at War' project could be utilised by other schools. 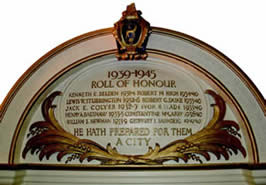