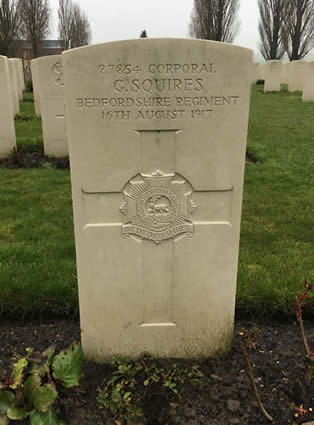 The 7th Battalion of the Bedfordshire Regiment was formed in September 1914. They were part of Lord Kitchener’s 2nd army of 100,000 men and were joined by 1000 Officers and men from the 6th Battalion. For training, they joined the 15th Scottish Division and were moved into the 54th Brigade of the 18th (Eastern) Division, with whom they travelled to France. They arrived in July 1915 and the whole regiment gained an impressive reputation, as they served in many major battles: although these cost the lives of 830 men and caused 3,500 casualties. Towards the end of the war some of the battalion were moved, whilst others went on to train the arriving American troops. Most of the troops in this battalion were from the South-East of England.

From the 7th Battalion of the Bedfordshire regiment, Corporal George Squires was killed in action on the 16th August 1917. A resident of Hemel Hempstead (from where he enlisted), he had been born in Thame, Oxon. He is buried in Tyne Cot Cemetery in Zonnebeke, West-Vlaanderen in Belgium and is remembered on the Apsley Mills memorial. The Tyne Cot cemetery has 3591 identified casualties and is located 9kms north-east of the Ieper town centre. It was designed by Sir Herbert Baker and F.V. Blundstone created the sculpture of the memorial. It actually contains two different registers of names of those who are buried there: some on the memorial and others on headstones.

Its name originated from to the Northumberland Fusiliers in 1917 during the battle of Passchendaele. They named a barn Tyne Cottage which stood near the level crossing. It was memorable as it had been in German hands for a long time, controlled by a number of blockhouses, but was recaptured by the 3rd Australian division on 4th October 1917, during the battle of Passchendaele. It also changed hands a few times after this, but was eventually recaptured by the Belgium Army; this meant that many of the graves were laid at different times. After the Armistice, the cemetery was enlarged as more soldiers were found and buried; it also took soldiers from other sites, so that more soldiers were in one place together. It is possible that Corporal George Squires was initially placed at one of eight other burial grounds, but we are unable to determine if this is true.

The cemetery became - in terms of burials - the largest Commonwealth cemetery in the world; altogether, there are now, 11,961 Commonwealth servicemen from World War One buried or commemorated here. In 1922 King George V visited the cemetery and suggested that a large Cross of Sacrifice be placed there. 8373 are still unidentified, but memorials were added for those believed to be buried amongst them; the site also includes 4 German burials. The memorial itself commemorates 35,000 servicemen whose graves are not known from the UK and New Zealand, who died in the area after 16th August 1917. Interestingly, it is positioned close to the point from where, until the end of World War One, the Commonwealth forces struggled to advance.

On the 16th August 1917, the 7th Bedfordshires were part of large offensive attacks to try and push the German lines back. On the zero hour of 4:45am, B company attacked the German strong point; they had previously moved into formation as commanded by one of their Lieutenants. The attack, as stated above, was part of a much larger offensive, with another attack taking place to the regiment’s left.

From the start, the German troops were bombarded with a heavy artillery barrage, exposing the troops to a large amount of shrapnel, which also had the potential to kill Commonwealth troops as well: shrapnel tended to travel over long distances, thus being a possible cause of death for Corporal George Squires. The Bedfordshires also attacked the Germans with 4.5 Howitzers: horse-drawn artillery guns. However, the 4.5 Howitzers were unsuccessful at actually hitting the strong points of the German line, possibly because of positioning. This meant that when B Company moved forwards, they were hit by the British artillery instead, which wiped 50% of them out. The Captain of D company tried to support them with a platoon, but, due to heavy machine gun fire from the Germans, they were unable to provide much aid. The attempt to capture the German strong point was abandoned and they spent the rest of the day in ‘artillery duals’, preventing the infantry from directly being in combat.

The area around the village of Passchendaele became an area of mass slaughter of troops for both sides. The belief from the British perspective was that if they could break the German hold on the Ypres Salient area, then the war would not last for much longer. The attacks were mostly unsuccessful, partially due to heavy rain and bogged conditions, making it difficult for troops to move or gain ground. Artillery fire did little to help these conditions, particularly when they fell short into No-Man’s land, as they churned up the mud even more. On the day on which Corporal George Squires was killed, a four-day offensive begun along the line, which resulted in a British victory, but at great cost. Gains were small and a German counter-attack soon recovered much of the land gained at Langemarck.

The next phase began, and even with the Germans having regained land, due to the use of tanks (as well as multiple attacks along the line), the British and French held their positions. At Verdun, the French troops were able to capture 5,000 Germans. By the end of September, the British had control over a ridge of land to the east of Ypres. Attacks continued into October, but the Allies suffered from severe exhaustion, and the Germans were now being reinforced by reserve troops who had redeployed from the Eastern Front. The troops did manage to recapture Passchendaele which meant that the offensive was called off and the Allies claimed a great victory, but it cost the lives of 31,000 British and 26,000 German soldiers. This meant that it was viewed as very controversial, as it did not manage to break through the German lines and it cost the lives of tens of thousands of men. 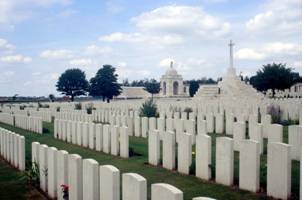