Longer summaries of stories on this page are available here.

When war broke out in September 1939, the greatest fear of many people was the bombing of cities by the German air force (Luftwaffe). This stemmed form the fact that aeroplanes had developed greatly during the 1920s and 1930s and it was widely feared that aerial bombing would the main feature of future wars.

In particular, people looked to the example of Guernica in Spain, which had been bombed in 1937 during the Spanish Civil War.  It was feared that a similar fate would come to the people of British cities.  As a result, in the first four days of September 1939, nearly three million people left cities and towns to find safer places in the countryside.

Some evacuees soon went back when aerial bombing did not begin immediately, but many stayed away for much of the war, and others left cities later.  As a small rural town, Hemel Hempstead was a destination for many evacuees. 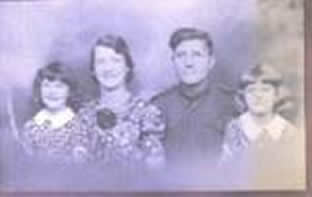 Above left: Audrey Deller (front row on the right) during her first evacuation to Spalding

in Lincolnshire. Note the gas mask boxes and the labels worn by the children.

Above right: Mr & Mrs Deller with Audrey during Mr Deller's first leave from the army..

Audrey Mullard was Audrey Deller when war broke out, and a four year old old resident of Tottenham in north London.  She was evacuated towards the end of 1940 and remembers how she left London with her mother and sister.  She was very unhappy to leave her father working in London, along with her cat.  The family was moved around different places and billeted with four different families in Hemel Hempstead.  It was not easy being with another family.  Audrey says:

Although we got on reasonably well with one family that we were billeted with, unfortunately I have no happy memories of the others. In one billet we would leave a roaring fire and have be in our cold bedroom before the man of the house came home between 5 and 6 pm. We had a sparsely furnished bedroom with a lino covered floor, and there was just one double bed for my mother, sister and I.

Audrey pictured on the left next to her sister Shirley and in front of      38 Paradise where Audrey lived for much of the war.

Read more about Audrey Mullard's life as an evacuee in Hemel here.

Hazel Wilkinson was evacuated from Hemel to a farm in north Wales, along with her sisters, Mary and Janet.  She remembers that an advantage of being on a farm was that fresh produce was close at hand.  Hazel recalls: “Local people got their butter and cheese rations from the farm. We think we had more than people who lived in towns.”  She found village school life very different to that of George Street Primary School, and though she has some happy memories of farm life, she was mostly unhappy as a ‘bookworm’ whose liking for reading was not always welcome. 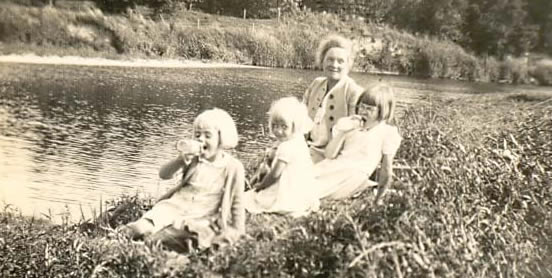 Hazel and her sisters enjoy a day out by the river near to the farm where they were evacuated in 1939. 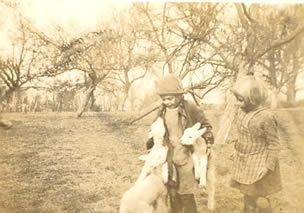 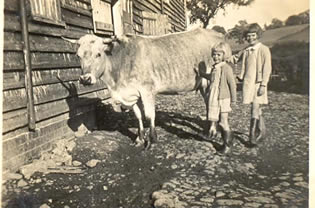 Life on the farm

Read more about Hazel Wilkinson as an evacuee here.

This is the story of Jeanette (Jean) Anne Martin, her twin brother James (Jimmy) Vernon Martin and older brother Ernest Peter Joseph Martin, who was always called Peter. They lived in Malden Road, Kentish Town in London and were evacuated to Berkhamsted.  The twins were separated from their brother, Peter, who was cruelly treated and ran away.  Jean remembers, ‘He was so unhappy he ran away and hitch-hiked and walked back to London, about 28 miles…’.  He was sent back and ‘put in a strict boys’ camp run by the Boys’ Brigade in Great Gaddesden.’  The camp was probably the one at St Margaret's near Great Gaddesden, details of which are here.  Jean recalls that although children were ‘shielded from the full harshness of what was happening in the war’, they could still ‘hear the barrage in London. You also knew that because of what was happening you might not see your Mum and Dad again.’ 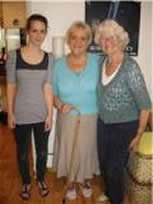 Above left: Jimmy and Jean Martin.

Above right: Jean (centre) was photographed at her home in north London with her sister-in law,

who was also evacuated as a child and who later married Jean's brother, Peter.

Jean was interviewd by Sarah Jane Kay, also shown in the picture, in July 2010.

Daisy Lowe was born Daisy Brannon and was living in Islington at the start of the war, when she was seven years old.  She was evacuated with her six year old sister, June, her baby brother Terry, her mother, and other relatives.  The relatives were split into small groups, but all lived in Boxmoor: Sebright Road, Grosvenor Terrace and Horsecroft Road. She remembers, We used to ride our roller skates to St John's School but a policeman stopped us because the skates made a sound like something dropped by German aeroplanes….’  She later attended Corner Hall School where she ‘spent many hours in the shelters during air raids when we were all encouraged to sing and were given barley sugar sweets.’

We had a Welsh school teacher billeted on us and we became lifelong friends. We had two school teachers. One (the Welsh lady) did everything she possibly could to help – did the washing up, made the beds ready… The other thought she was in a paying hotel and did absolutely nothing. You can know which one we liked!

On September 1st,1939 my mother took me from our new house in Boston Manor to a new school with my name on my lapel and a lunch bag. Did not know anyone.  From there we were taken to Hammersmith underground station where we waved goodbye to our parent(s) and from thence to Euston rail station to go somewhere!

We ultimately arrived in Hemel  Hempstead and were trooped through the local streets. Home owners would look us over and decide which child or children they would take in.  I lived with a middle-aged couple who had one son two years older than me and, as I was a small child much bigger than me. I did not enjoy the twenty months there and was greatly relieved to move to my aunts ’in-law’ home in Bovingdon.