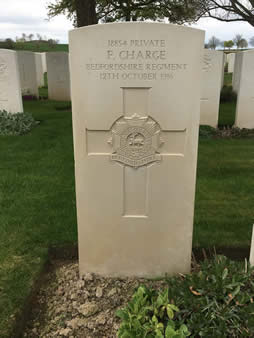 Fred Bandfield and Frederick Charge were both privates in the 2nd Bedfordshire battalion and were killed in action on 12th October 1916. This was during the Battle of the Somme in the lead up to the capture of the French town ‘Gueudecourt’, successfully advancing on the Gird and Bite trenches surrounding it.

The battalion prepared to attack at 11:00am, when a party of Germans (2 Officers and 50 men) appeared at the Gird trench. They were without arms as a sign of surrender, but hesitated to come over due to fear of being shot. A British Lieutenant approached the trench, but a shot was fired, leaving the Germans to return to their Trench. The attack commenced at 2:50pm, and the battalion split four ways; Coys A, B, C and D. Coys A and B travelled towards the left about 60 yards, but came under heavy machine gun fire causing many casualties. This is the most likely event where Privates Bandfield and Charge were killed in action. The coys then remained there until nightfall.

Coys C and D advanced towards the right, making more progress despite also being under heavy machine gun fire. The B company pushed on and captured 200 yards, and decided to it was useless to go any further due to their success, so dug a trench. These trenches were completed by 5pm and were eventually converted into a magnificent fire trench, however could not have been expanded due to enemy fire. The D company of a captain and 50 men were isolated from the other companies, and messages could not be sent, as runners were either killed or wounded. However, messages finally got through after dark by a crawling runner, telling the company to withdraw to their original position, which they did so.

The total gains of the day were about 200 yards on the Bite trench and 70 yards of the Grid trench. The Battalion did magnificently and were the only battalion to gain ground on the corps front. The night passed quietly and the enemy did not counter attack, making the day a huge success.

By Poppy Whalley and Ed Shaw